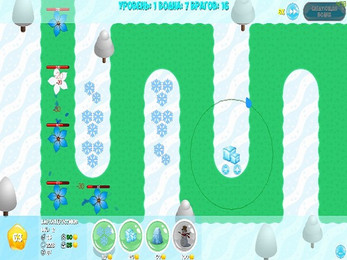 Spring is coming, but winter refuses to go away! You will be writing a very unexpected story, as you will play the role of winter, which fights off the spring! The game is similar to others of the Tower Defense genre, but instead of the usual towers you will have snowflakes and ice that will fight off the budding flowers, beetlesand the like associated with spring. Also, you will observe some changes in the game process and not only in the levels themselves …And how things will unfold is for you to find out in the game itself. Controls:The game of the Tower Defense genre, so if you’re familiar it will be easy to figure out how to play. Left-click (LMB) – select and set the tower. Right-click (RMB) – press to move the game field, and a single click cancels the selection of the tower. From the top there are buttons to accelerate time and launch the next wave of enemies. Towers can only be placed on the snow! LMC on the tower to choose and improve or sell it. Towers of the 4th level are the most powerful, and shoot self-guided missiles unlike the others. In the game settings, you can always change the level of difficulty (easy, medium and complex), and also reset the game or change the language (Russian or English). The game is always automatically saved immediately after passing through each level, and that’s loaded at startup.
Game Giveaway of the Day