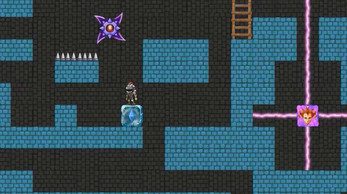 There was a count in his own castle and he was very rich. So that no thief could steal his treasures, the count hired a strange scientist-inventor from a distant country, who always wore a mask. This inventor, in one of the parts of the castle, made many mechanisms with the help of which he protected the count’s treasures. Time passed and the Count vnezano died, taking with him the secret of the mechanisms that reveal the hidden treasures. To open the hiding places and take possession of the count’s treasures, his relatives hired a local craftsman-inventor.              So, in order to get the treasures in each part of the castle, you have to solve the mystery of the mechanisms of a mysterious inventor in a mask. Memory  the  was a count not very good with , therefore, at his request, the scientist-inventor, making hiding places, left inscriptions on the tablets that suggest the way to open the hiding place. Use these tips to complete your task.     To protect himself, our hero put on the armor of a knight and began to unravel the secrets of the Kruosent castle. Be careful, some machinery can be dangerous.     In each level, be sure to collect all the coins.
Game Giveaway of the Day