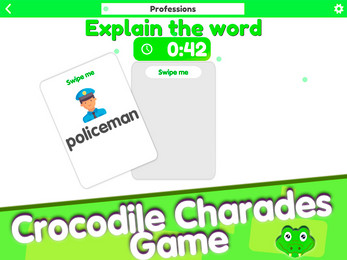 Crocodile Charades Game – Show the word using gestures and facial expressions of the word from the card so that other players can guess it. In this case, you can not make any sounds, point to objects and draw! Rules: The rules used for the acted charades are usually informal and vary widely, but commonly agree in essence with the basic rules:The players divide into 2 or more teams.One member of the team, the “actor”, gets a random phrase or word, which is kept secret from the remainder of the team, the “guessers”The actor then has limited time in which to convey the secret phrases to the guessers by pantomimeThe actor may not make any sounds or lip movementsThe actor can act out the phrases in order of his choosing and can switch between phrases anytimeThe actor cannot point out at any of the objects present in the scene, if by doing so they are helping their teammatesMost commonly, the actor is allowed to make any gestures other than blatantly spelling out the wordThe guessers attempt to guess the words or phrases based on the actor’s performance. They can ask questions, to which the actor may give non-verbal responses, such as nodding in affirmationIf any of the guessers says the correct word or word within the time limit in the literal form, the team gets a point for that wordThe teams alternate until each team member has had an opportunity to be the actor Download and play this game with a group of friends!
Game Giveaway of the Day